One of the reasons why “A Song of Ice and Fire” series as well as its screen version “Game of Thrones” are so incredibly popular is George Martin’s realism of the narrative. The story of the Seven Kingdoms of Westeros looks like a typical medieval chronicle about feudal civil strife. And it should not surprise you since George Martin actually studied the works of professional historians and borrowed some plot ideas and images of his characters from the history of Middle Ages. We’ve found several parallels connecting Martin’s fantasy world with the real history.

1. The Wars of the Roses

Perhaps one of the most obvious historical parallels of the “A Song of Ice and Fire” series is the War of the Five Kings, which is based on the events of a long and debilitating War of the Roses in England. Even the names of the main warring Houses Stark and Lannister are consonant with the real York and Lancaster.

George Martin himself many times admitted that the used the Wars of the Roses as the main source of inspiration while describing a confrontation in his series. And if you look closer, you’ll see a lot of similarities between the plot of the novels and real events. For example, the origin of conflict in the Wars of the Roses was a disagreement between the descendants of King Edward III and other possible contenders for the throne. The War of the Five Kings started after the death of King Robert I between the heirs of the Iron Throne.

Another good example from the history of the War of the Roses is fantasy character called Tyrion Lannister. Tyrion is an intelligent and strategic politician, who due to his physical appearance is often accused of all kinds of possible vices. Despite the fact that Martin used to say that Tyrion Lannister is similar to the author himself, this character obviously refers to us as an image of Richard III. By the way, alike historians accuse Richard of killing his own nephews, Tyrion is accused of killing his nephew Joffrey.

Symbols of The Wars of the Roses

According to the plot, the Red Wedding is a massacre during the wedding of Edmure Tully and Roslin Frey, which was supposed to reconcile two houses – Stark and Frey. The young King Robb Stark and his mother Lady Catelyn following the guest right ate bread and salt from the same dishes and roof as the guests and Lord Walder Frey himself, which meant full protection. It was necessary for them, since Frey’s House had every reason to dislike the King, who promised to merry the Frey girl and did not keep his word. When the song “The Rains of Castamere” started to play, Catelyn understood everything, but it was too late. All guests were killed during the massacre, including Robb Stark, Catelyn and almost an entire army of the North.

Historical events, which became a basis for this bloody episode, occurred in Scotland. One of them is called Black Dinner. Clan Douglas opposed to the royal dynasty for a long time. One time a 16-year-old Earl William Douglas and his younger brother were invited to Edinburgh to make peace. Guests carelessly had fun at the feast arranged by members of the royal family, until they heard a long drum beat and saw servants bringing a head of a black bull. At that moment young Douglas understood everything, but it was too late.

Glencoe Massacre is another prototype of Martin’s Red Wedding. In 1692 members of the Campbell clan visited the MacDonald clan and were accepted under all laws of hospitality. However, at the King’s order, one night the Campbells killed their hosts sparing neither woman, nor old people, nor children.

According to the novels of “A Song of Ice and Fire” series King Stannis I Baratheon takes advice from the Red Priestess Melisandre, who worshiped the foreign Lord of Light R'hllor. The Lord of Light is a God, whose religion is centered around fire and light. This is the main religion of the Free Cities, which has spread from Asshai to the Far East. But it is not so common in Westeros.

Apparently, the belief in R'hllor is based on the ancient Persian religion called Zoroastrianism. According to the Zoroastrianism, a fire has an ability to provide spiritual insight and wisdom accumulated by all mankind. People often pray in special temples near the fire. Just like the religion of the Lord of Light Zoroastrianism emphasizes the war between good and evil and its duality, which in the novels described as the Lord of Light and opposing deity the Great Other.

One of the primary symbols of Zoroastrianism

The Battle of the Blackwater is the largest battle in the history of the War of Five Kings. It took place when Stannis Baratheon attempted to take over the King's Landing, the capital of Seven Kingdoms. Stannis was defeated by Tyrion. Lannister destroyed the fleet with the help of wildfire, which is a chemical substance capable of burning even on the water.

This plot idea George Martin could have borrowed from the second Siege of Constantinople, which would inevitably surrender without the famous Greek fire. Greek fire was tossed in the enemy ships resulting in a huge fire, which continued to burn even on the surface of the water. Sounds familiar, doesn’t it?

In addition, according to the novels, Tyrion held a giant chain across the bay to prevent Stannis’s fleet from approaching the shore. A similar chain was also used in Constantinople.

Hadrian's Wall is a 120 km long stone defensive structure built by the Romans in the second century AD under the Roman Emperor Hadrian in Britain (nowadays it is a border between England and Scotland). The wall was intended to prevent the raids of barbarian tribes. In 1981 a 33-years-old George Martin traveled outside of the US for the first time to visit his friend, who moved to England. One time they drove to the Wall when it was almost dark outside. The writer looked at the surrounding expanses and imagined himself as a Roman soldier, staring at the forest full of danger. At that moment George got an idea to write a story about people, who are guarding the edge of the world.

In “A Song of Ice and Fire” Hadrian's Wall turned into a gigantic 200-meter Wall stretched from shore to shore. This colossal fortification designed to protect the Seven Kingdoms of Westeros from the wildlings that live beyond.

Martin found the original wall in the state of decline, therefore at the beginning of his legendary series once an honorable defensive institution is now has fallen on hard times. It used to be a great honor to be a part of the Night's Watch and nowadays the service is often seen more as a colony. 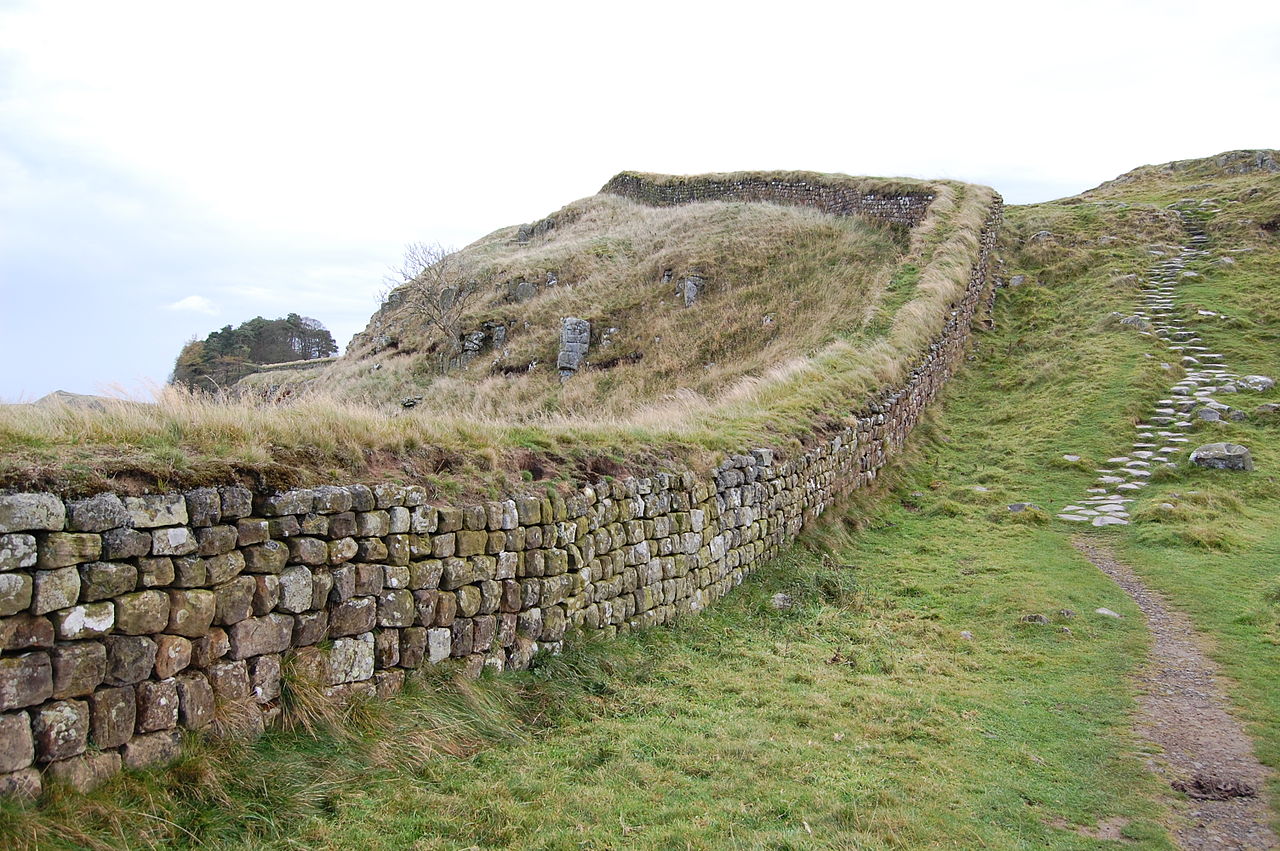